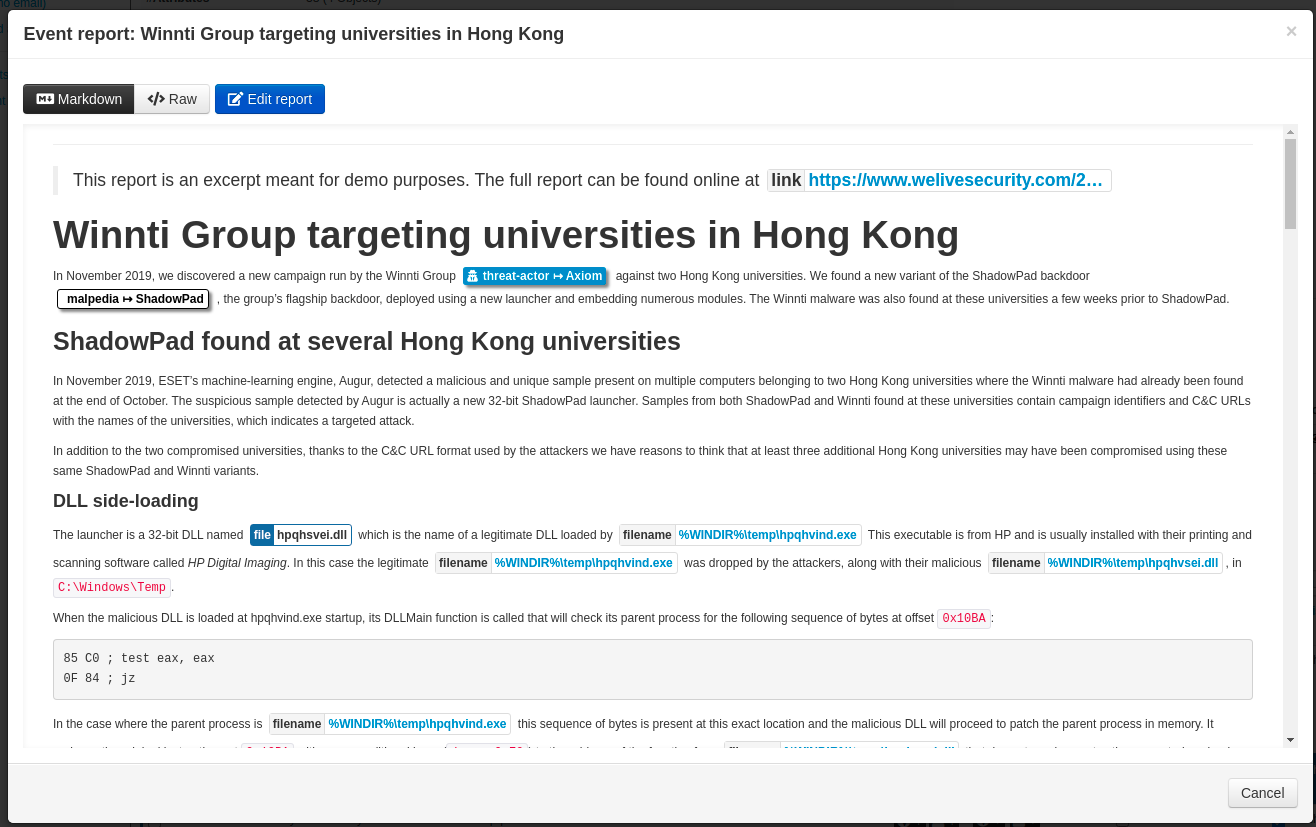 This article presents the most recently introduced feature to manipulate and share reports in MISP as well as provide tips and tricks on how to use it in the best possible way.

Note: In order to have a meaningful example, excerpts of the article from welivesecurity.com about Winnti Group targeting universities in Hong Kong have been encoded. The full demo event along with the event report is available here.

As the name Event report indicates, reports in MISP are contained inside an event. It is important to note that events can contain more than one report. 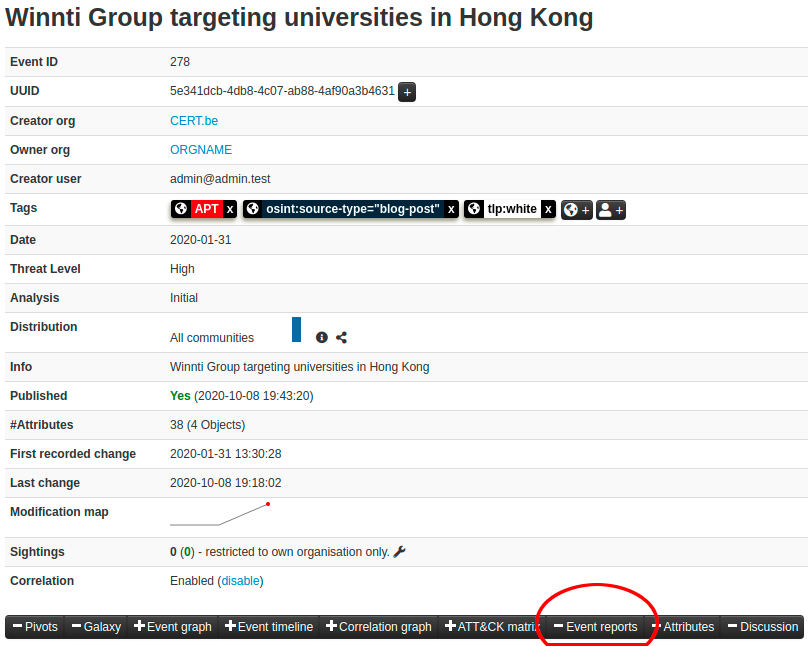 An Event report must have a name consisting of a few words summary about what you would expect in the report and a distribution level. The report’s content can also be set here, but it is optional as a dedicated editor interface is available.

Similar to attributes, reports can be either soft-deleted or hard-deleted. The advantage of soft over hard is that the delete directive will be propagated in the network of connected MISP instances whereas the other will only be effective locally.

To put it simply, event reports behave like attributes meaning that their distribution mechanism is identical.

A report’s content can be non-formatted raw text but the power of the feature comes from its markdown parser. As a matter of fact, markdown format is highly recommended as it offers an easy-to-use syntax, a pleasant document, and if coupled with MISP custom directives, an easy-to-write pleasant interactive document!

The editor interface presents a menu where reports can be downloaded in different formats and markdown rules can be turned on and off. Information on how to use the custom MISP markdown directives, supported markdown plugins and editor shortcuts can be found in the help menu.

When it comes to editing, the best way to write a report is to use the split-screen mode as it offers both a text editor and a markdown viewer at the same time, providing an intuitive WYSIWYG experience. 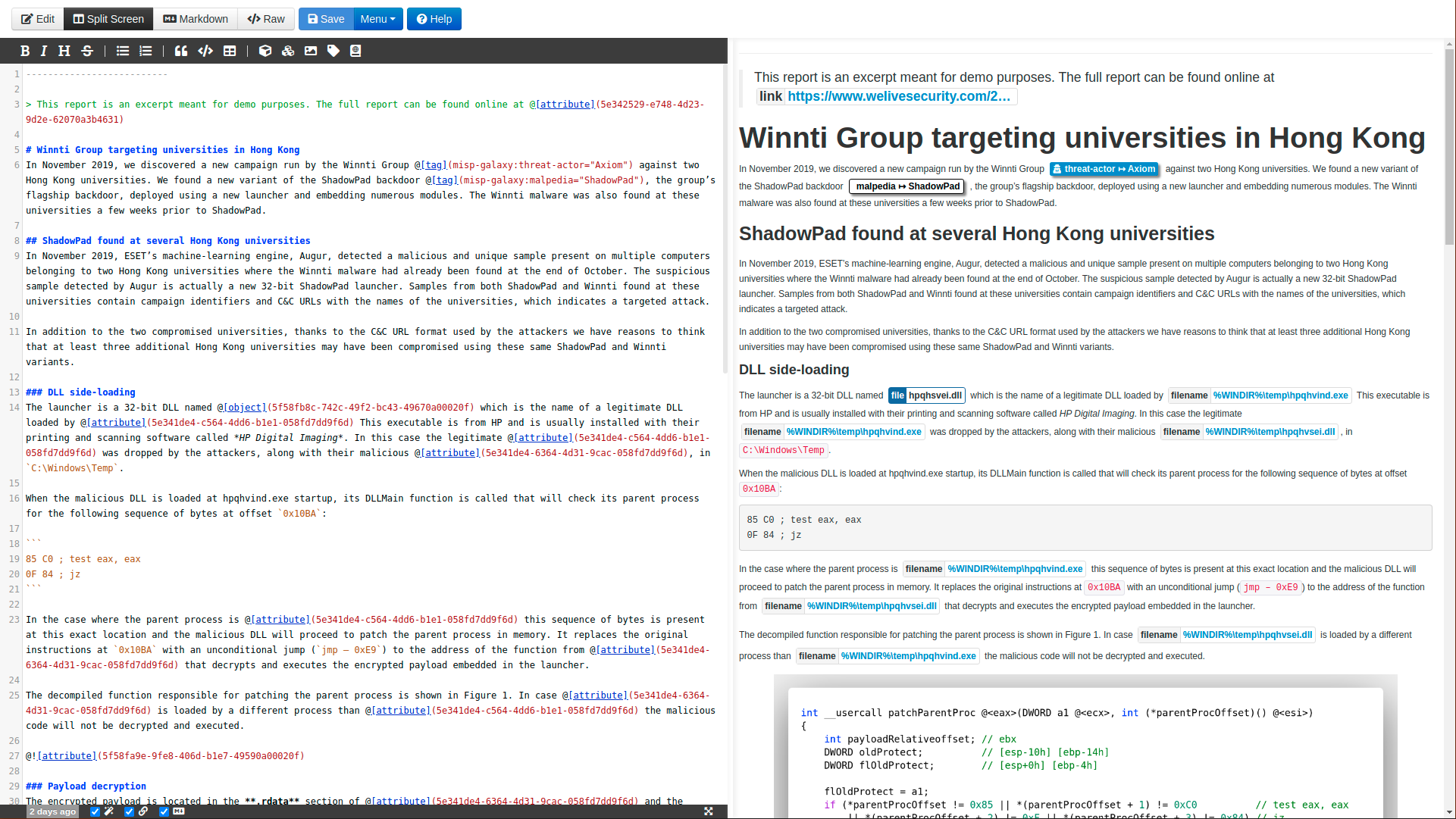 The editor provides features such as:

The supported markdown format is similar to GFM with some differences:

It means that you can use standard markdown syntax such as italic, bold, code block and tables, but it also supports custom commands to reference attributes, objects and tags called MISP elements.

In order to reference MISP elements, a syntax close to the markdown’s link syntax is used

Here are some examples with their UI appearance

With this special syntax, MISP elements can be referenced and reports become interactive by clicking on the rendered MISP elements.

The editor provides auto-completion for various types of datapoints. Once the scope is picked, suggestions are proposed based on the value provided in the UUID field. Once the hint is chosen, the provided value is replaced by the actual UUID of the element, the only exception being for tags.

With the support of reports built-in in MISP, a new kind of knowledge can be used. Classical threat intelligence reports, malware analysis articles or even something of a completely different taste can be shared along with the actionable data.

Furthermore, it opens the door for new ways to create information in MISP. In the future, we could imagine doing it the other way around by extracting IoCs, threat actors and so on directly from the report.