MISP 2.4.154 released with a host of new features and fixes, including some new tools that help us navigate the current geo-political landscape when sharing information.

Difficult times often call for radical measures, with the recent world events we’ve seen more and more communities rapidly reorganising as well as new large communities being established. Sharing information with only subsets of communities has become ever more important and whilst we’ve had the tools to facilitate this in MISP for a long time, rapidly managing different, often overlapping groups has been difficult.

Sharing group blueprints allow us to programmatically define reusable blueprints for generating sharing groups, based on inheritance and various filters to automate the task of maintaining the groups.

Sharing group blueprints accept JSON objects based on which they generate a sharing group each, where various filters can be set for the decision making. The syntax allows for boolean operators as well as the use of organisation metadata and existing sharing group inheritance. This can also be used to create derivative groups with certain members being excluded, for example the below would be such an example:

This system thrives on well maintained organisation lists, so make sure that you put in the extra effort of contextualising your organisations!

Once a blueprint is created, you can review the organisations to be included and if you are satisfied, create the actual sharing group by clicking on (re)generate sharing group. 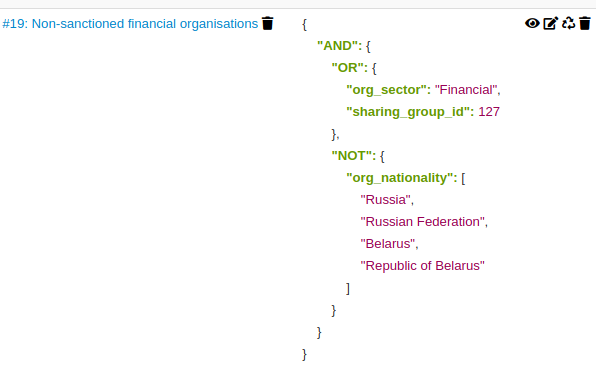 One of the advantages of this system is that the regeneration can be run at any time, for a single sharing group or for all, via the interface or the API. This means that creating a cron job that updates all sharing groups based on the rules regularly is trivial, ensuring that for example inherited organisations via updated child sharing groups are updated continuously.

Improvements to the OIDC authentication

A host of improvements and fixes, including the switch to a new library, developed by Jakub Onderka.